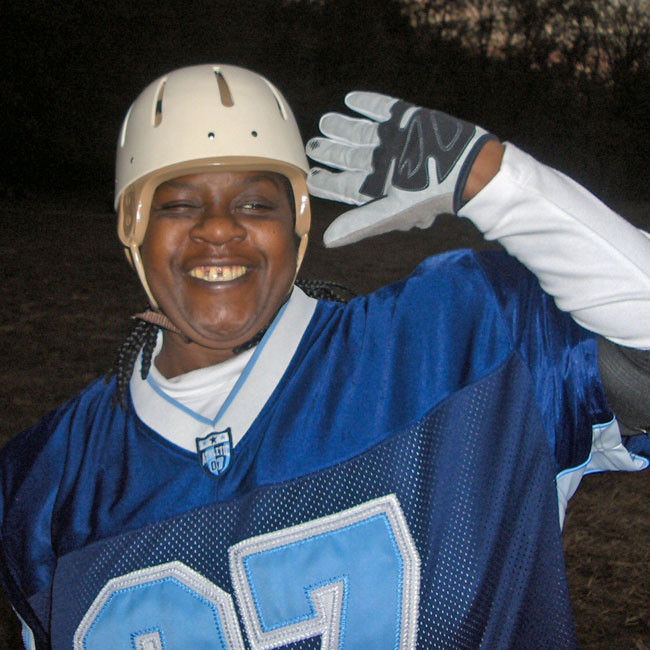 This is Maggie’s story.

Maggie was one of the first supported living customers served out of our Columbia Tennessee office and the very first class member being supported by Bios of Tennessee in middle Tennessee in May of 2005.

For those of you who did not know Maggie, she was our real first test to see if we were going to survive as an agency in Middle Tennessee. DIDD blessed us with this young lady who was residing at the Greene Valley Developmental Center in Greeneville TN (East Tennessee). Maggie was the only female living in an all-male complex on GVDC’ s campus.

We weren’t given much of a chance at all to be successful supporting Maggie, and why would we? The odds were so not in Maggie’s favor. She had been in nearly every institution across the state from east to west and back again, along with several other community-based agencies who had their chance and failed miserably. The turnover in prior staff with other agencies was staggering because no one wanted to endure what Maggie had to dish out during those days.

Maggie was so challenging, so physically and verbally aggressive and so tough to support that she was the only individual that was allowed an exception for the use of prone restraints as part of her plan, authorized by the State of Tennessee and DMRS. BIOS did not agree with this, nor did we request approval to do so once we moved her to her new home in middle Tennessee. Maggie had more restrictions in place originally than everyone we have ever supported combined.

Maggie had never known unconditional love and compassion from anyone providing paid supports. She certainly had not encountered what she was about to experience from her new Bios staffing team, who were eager and willing to support her. Maggie learned that the group of people working for her at Bios was forgiving, loving and would never leave her no matter what. And no matter how hard Maggie made it for her staff to stay, they stayed and loved her through it all.

A little background from Maggie’s prior history:

At the time, Ms. Maggie was a 39-year old woman with mild developmental delays. She was admitted to GVDC for the third time on 10/24/02 following an emergency room visit in Knoxville. Ms. Maggie told the hospital staff that she had been beaten by her staff during an altercation. Ms. Kathy, her conservator/sister (since 12/01), pulled agency and ISC supports following this incident. Currently, Ms. Maggie has a new ISC but no residential provider agency. Ms. Maggie has received support services for mental health issues since 1979. There have been numerous agencies providing these services with no stability over the long-term other than admissions to GVDC and Nat Winston. Each of the other providers has either only provided temporary acute care or has rescinded services due to behavioral issues.

Throughout all these facilities, available records indicate little to no improvement.

How were we going to be different than anyone else who previously supported Maggie, and how would she ever trust us or anyone with what she had been through?

Maggie transitioned to Bios in May of 2005. At the time she was angry and physically aggressive, and had been angry and physically aggressive for a long time. People working for the State of Tennessee who knew Maggie actually referred to her as a monster. Plexiglas was placed on her windows and over her television to prevent expensive property destruction. Maggie’s caring and dedicated staff began nurturing her, reassuring her that she was safe and that they would be back day after day. Slowly they earned her trust and taught her that she was a person of value. Maggie learned to talk over her issues in advance of an angry outburst that would not solve the underlying problem. As she began to feel safer with the people who supported her, she gave up on her violent and destructive behaviors.

Maggie often tested administrative staff to see if they would pay attention to all of her issues. When she expressed a desire to meet potential new staff before they were hired, this was arranged. When Maggie noted that one of her staff spent a little too much time discussing her personal life, Maggie informed her program manager that she did not want to hear it. An in-service was conducted with the staff concerned, and the issue was resolved to Maggie’s satisfaction.

In 2008, all the Plexiglas in her home was removed because there had been such a long interval since Maggie’s last incident of property destruction.

In March of 2010, Maggie’s LON 6-Individual was reduced to a LON 4-Individual. Maggie the “Monster’s” life had become so much richer and fuller that she no longer qualified for a LON6. In fact, proving that feeling safe and loved makes a person want to be loving and engaged, Maggie decided that she wanted to reach out to a friend of hers who was having difficulty. She wanted to be this woman’s roommate so that she could mentor and inspire her. Maggie wanted her friend to feel safe and loved as well. The roommate process was begun.

However, in May of 2010 Maggie was taken from us by a combination of health issues culminating in a fatal heart attack. She had become a friend to us all, as well as a success in her own life. We made a difference in Maggie’s life and she died happy knowing she was loved. She touched so many people during her life and we are proud to say she touched ours.